Michael Kleine, President and Chief Executive Officer of Miramar Labs, said, “We continued to achieve very strong momentum in our North America business, which grew 38% in 2016, driven by our efforts to increase awareness and adoption of our technology. We are also benefiting from the indication expansion for the miraDry® system, which now provides three distinct benefits to both physicians and patients with its ability to reduce axillary sweat, odor and hair. This unique value proposition for our customers and consumers, is a core driver of expanding our business and delivering on our growth objectives.”

In 2016, Miramar expanded its approved indications for the miraDry system and received FDA 510(k) clearance to market for the reduction of odor. The miraDry system is now FDA cleared with indications for sweat, odor and hair reduction, expanding the utility of the system. Recognition of these advancements of the application of the proprietary miraWave technology was recognized with Aesthetics Everything naming Miramar Labs as one of ”The Top Aesthetics Companies in 2016″.

Mr. Kleine concluded, “We are excited to continue building consumer awareness and further accelerating sales with the addition of celebrity spokesperson and miraDry patient Antonio Sabato Jr. This is complementary to our strategy to increase our focus on social media, where we have seen a strong interest reflecting the early impact of our miraDry is Confidence campaign. In addition, our marketing efforts are building awareness of the miraDry treatment among potential customers and patients, highlighting its effectiveness and high patient satisfaction.”

Financial Results
Total revenue in the fourth quarter of 2016 was $4.4 million, a 18% decrease compared to $5.4 million in the fourth quarter of 2015. The year-over-year decline was primarily due to the timing of Asia console sales, which were received in earlier quarters in 2016 as compared to 2015. For the year ended December 31, 2016, revenue totaled $20.4 million, a 19% increase compared to $17.2 million for the year ended December 31, 2015. This revenue increase reflects strong sales of both capital systems and consumables. As mentioned above, North America growth was 38% for the year, with strong performance in capital systems and consumables. In Asia, revenue grew 6% for the year, driven by very strong capital system sales growth of 45%, offset by disappointing consumable sales associated with the transition of a distributor in a key market. In Europe and the Middle East, sales grew 10% driven by strong consumable sales with growth of 69%, offset by lower console sales due to the termination and transition of key distributors.

Use of Non-GAAP Financial Measure:
Miramar Labs has supplemented its GAAP net loss with a non-GAAP measure of net loss. Management believes that this non-GAAP financial measure provides useful supplemental information to management and investors regarding the performance of Miramar Labs, facilitates a more meaningful comparison of results for current periods with previous operating results, and assists management in analyzing future trends, making strategic and business decisions and establishing internal budgets and forecasts. A reconciliation of GAAP net loss to non-GAAP net loss in the most directly comparable GAAP measure is provided in the schedule below. GAAP net loss is the most directly comparable measure to non-GAAP net loss.

About Miramar Labs:
Miramar Labs, Inc. is a global medical device company dedicated to bringing innovative and clinically proven applications to treat unmet needs in the aesthetic marketplace. Supported by rigorous clinical research, Miramar Labs is focused on addressing aesthetic medical conditions for which there are significant unmet clinical needs. The company’s first priority is the treatment of bothersome underarm sweat, an issue that hundreds of millions of people deal with daily. The miraDry procedure has an established safety and efficacy profile with over 80,000 patients treated worldwide. Physicians and patients are encouraged to visit www.miramarlabs.com or www.miradry.com for additional information. 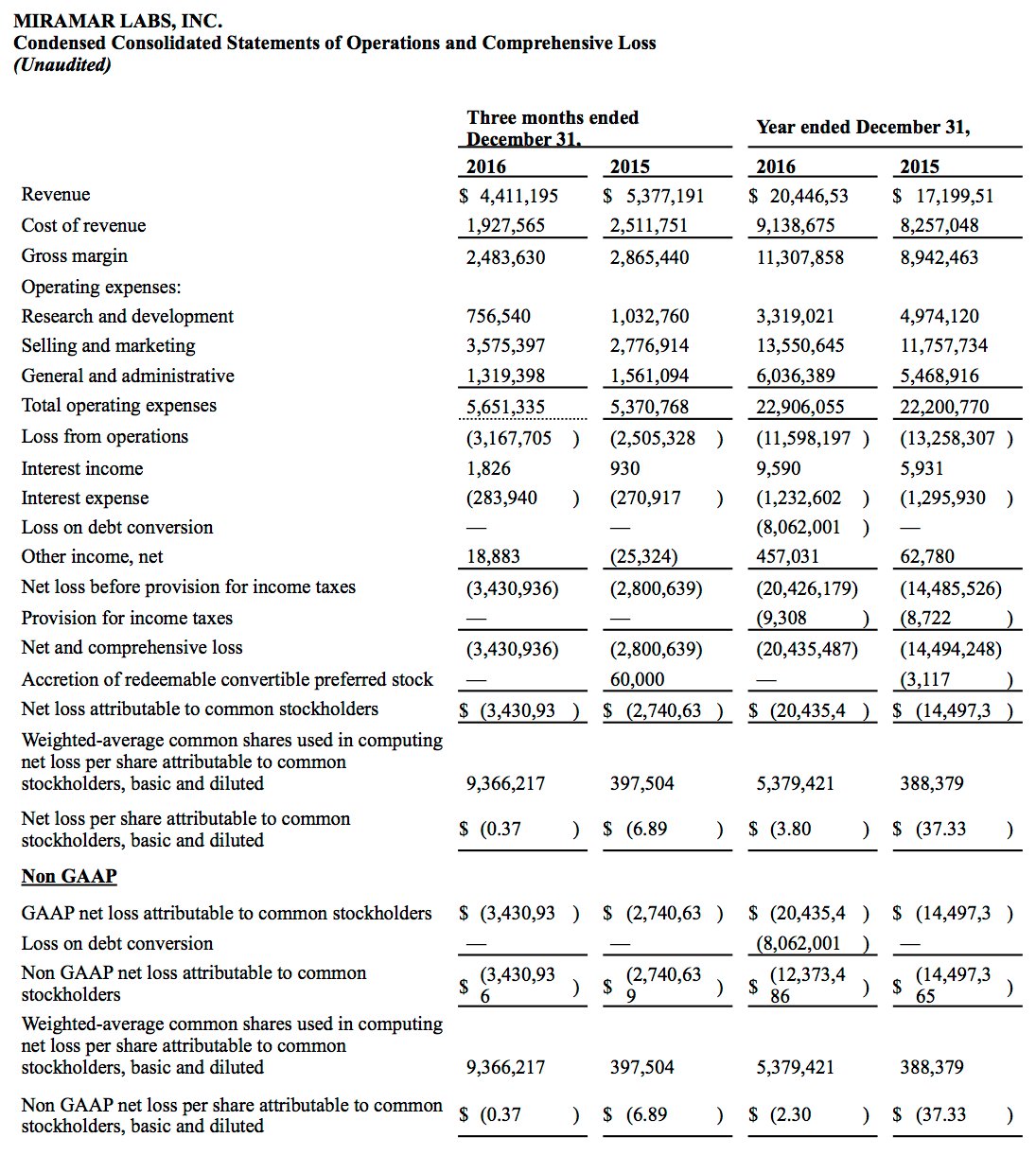 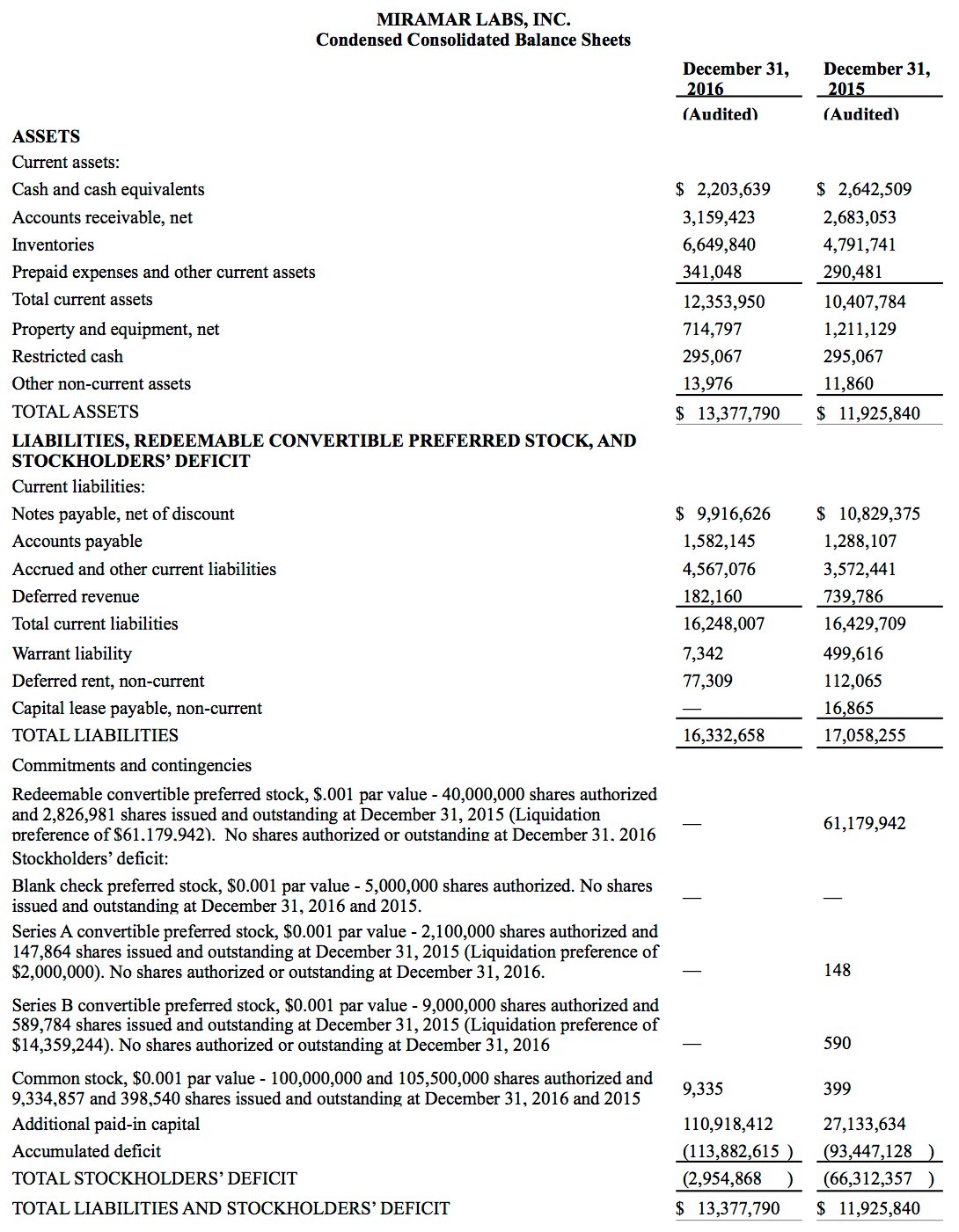 The miraDry system is FDA-cleared for the treatment of unwanted underarm sweat and odor, as well as the permanent removal of unwanted underarm hair. Outside the U.S., the miraDry system is intended for use by health care professionals for treatment of primary axillary hyperhidrosis in adults. Patient results and experience may vary. miraDry®, miraDry freshTM, miraDry ExperiencesTM, freshConnectTM, freshRewardsTM and mD ConciergeTM are trademarks of miraDry, Inc. Products may be covered by one or more U.S. Patents. Please click here to see patents associated with individual miraDry, Inc. products.

This website uses cookies and other technologies to enhance site navigation, analyze site usage and assist in marketing efforts. You may find out more about our use of cookies in our Privacy Statement. By continuing to use this site you accept our use of cookies.